https://www.pockethrms.com/blog/micro-behaviour-impact-on-people-and-solution/ – Impact On People And Solution 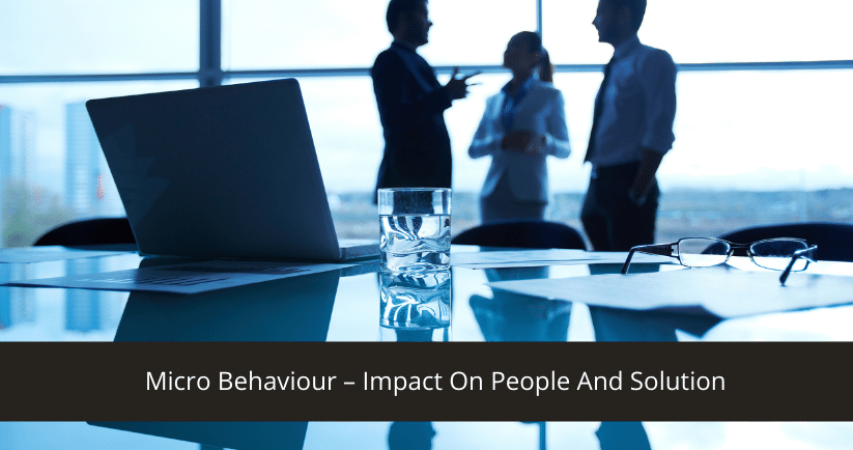 Creating a work culture where everyone feels included is imperative for the company’s success. Changing behaviour traits that result in micro-behavioural issues can be tedious if approached practically as these micro-behaviours are rooted in stereotypes and implicit associations- they need to be confronted using similar behavioural techniques.

Micro-behaviours are often unconscious tiny gestures such as facial expressions, tone of voice, posture, which can influence the people in the surrounding in either a positive or negative way. Psychologist Mary Rowe first coined the term ‘Micro-behaviour’ in the early 1970s. It refers to the concept of micro-aggressions or micro-inequities, that relates to many ways through which a person may be overlooked, singled-out, or ignored based on an unchangeable attribute such as gender or race. Studies have shown that a 10- minute conversation can deliver up to 50 micro-messages transferred between two human beings. These are known as positive and negative micro-behaviours.

More and more companies are making efforts to create a work culture where everyone feels included. Creating an inclusive culture will help to increase employee engagement, overall performance, and career progression, both on a personal level and companywide. But there is some behaviour hard to tackle as we are not aware of them. Many people end up showing micro-behaviours on workplace. Checking your phone during a meeting, glancing at the watch continuously, and implying you are busier than everyone else can send a powerful message about how you think. Showing people that your time is more valuable than theirs can make you come across as arrogant and egoistic, through no fault of your own as these gestures are reflex. It is very hard to identify micro-behaviours. And when the individual going through it does get an air of what they are doing, it already escalates to a big problem and becomes much harder to explain. Since the word itself is ‘Micro-behaviour’, they are often ruled out as insignificant, which is a big mistake.

Also Read: Top 10 Ideas to get your Workforce Super Engaged

It is not small, and can significantly affect the level of inclusion and value an individual feels. It can create a dent in their engagement with the company and with those who work around or with them. Other examples of people showing micro-behaviours on workplace include-
• Being ungrateful
• Treating juniors rashly
• Using nicknames for only close people and not for others
• Interrupting another person in their conversation
• Always being late to meetings and making other people wait
• Rolling eyes at someone’s mistake

Having said that, there are micro-behaviours that can impact the others in a positive way such as-
• Giving your full attention when someone is talking
• Letting everyone finish their conversation
• Not checking phones during the meeting
• Remembering names and their information
• Recognizing the achievements of everyone
• Maintaining eye contact

When seniors become a good role model for the employees, they will try their best to follow in their seniors’ footsteps. Such micro-behaviour on workplace can be avoided by following three easy steps-

1. Focus on your words

As you go about your everyday chores and tasks, before speaking, just think to yourself if the words that are going to come out of your mouth are going to be appropriate. Thinking before speaking can make a vast difference and help in controlling the negative micro-behaviour. The only way to reach equality is every one improves their way of talking and mannerisms.

2. Focus on your actions

A simple way to consider your actions is to think if you would react the same way with an individual of any gender, age, or background. For example, if you are a man and leaving the meeting with a woman, would you put your hand on her shoulder? If no, then don’t do it with anyone. Actions speak louder than words, therefore proper display of action in the workplace is very imperative.

3. Focus on your thoughts-

When you are in your workplace, self-awareness is very crucial. Many times people get lost in the flow and end up saying things they shouldn’t say or end up doing things they shouldn’t do. Therefore, being self-aware at all times, like what are you thinking, how are you going to reply to the person talking to you is very important. You should realize that you are in your workplace and there are certain rules and guidelines that you have to follow. Try to visualize your day from the beginning itself. How your day is planned. If you are going to meet an elderly person, what will you talk to them about, if you have a meeting scheduled with a client, how you would behave? Focusing on your thoughts will help you to be self-aware and in control of the situation, and thus help you in controlling your negative micro-behavioural aspects.

Takeaway-
All one can do is start each day and try to make it better than yesterday. This applies to your productivity, efficiency, presence of mind, everything.

Handling an individual can become challenging for HR if the situation is getting out of control. To know more about how HRs can manage such complicated situations, read our blogs here or contact us at sales@pockethrms.com 11 Must Have HR Policies for Every Organization

Reading Time: 6 minutes HR policies are formed to protect both the company and the employees. Human resource policies are essential for every organisation. It’s not just a set